The ANM config ANM_config.ocio is designed for work on CG animation shorts and features. The VFX config VFX_config.ocio in contrast is designed for integrating CG and VFX with live action film. Consequently each has different Display Transforms geared for its particular pipeline needs. 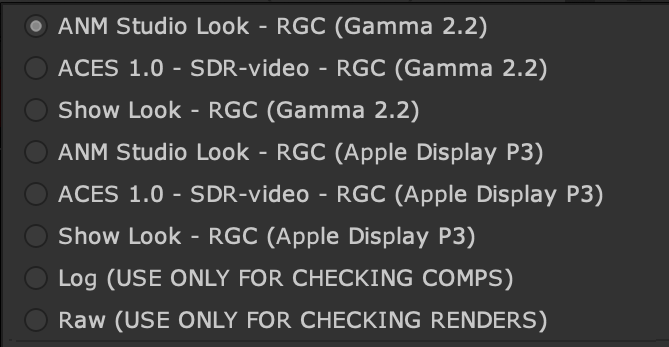 All View Transforms in the ANM config contain the ACES Reference Gamut Compression (RGC) applied. Note that this is not the case for the VFX config below, where the RGC is applied as a comp node in Nuke.

In OCIO, a View Transform is paired with a Display Transform corresponding to the display it is being viewed on. As you can see in the image above, in Nuke these are all in a single drop-down menu with the display listed in parenthesis after the view. In Maya, the View and Display are separate drop-downs.

The remaining view transforms are the same as the default Maya 2022 config and are used for diagnostic purposes. 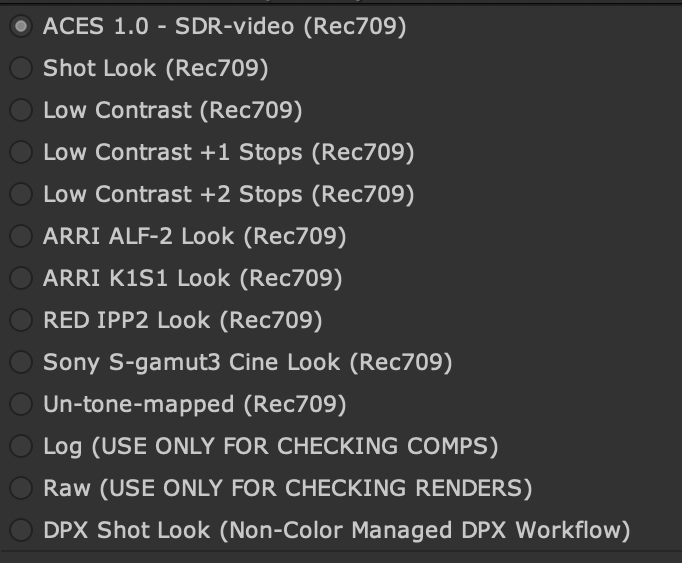 As noted above, in a VFX pipeline gamut compression is applied as a node in VFX and thus not included in the Display Transform.

In the VFX config all the view transforms are paired with the Rec709 display transform.

These are for clients who want to have an ACES compliant show, but with the look of popular camera vendor DRTs (display rendering transform) such as ARRI’s classic K1S1.

There are again transforms for diagnostic purposes.

Both the Show Look from the ANM config and the Shot Look and DPX Shot Look view transforms from the VFX config use contextual variables to apply the shot-specific look LUT provided by the client to the view. The variables are defined in the config and can be set by the artist. Shot Look is intended for LUTs in an ACES pipeline (the client is delivering EXR files in ACES2065-1 color space) and DPX Shot Look is for LUTs in a non-color managed display-referred pipeline (the client is delivering DPX in the log space of the original camera raw).

The config has the following section at the top.

Because the config file uses OCIOv2 it is self-contained and does not require external LUTs, instead using built-in mathematical transforms. Therefore each artist can simply copy the VFX_config.ocio file into their local directory for the show they are working on, and edit the file setting the above variables to correspond to the location (LUT_PATH) and name (LUT_NAME) of the LUT for the shot they are working on. Additionally if the client is delivering a LUT for display-referred DPX footage, the color space of the original camera should be entered into the CAMERA variable to set the log space for the Shot Look DPX display transform.

In the StudioX VFX directory structure, the OCIO config directory is parallel to the shots directory:

Therefore to go up a directory simply use ../ at the front of the file path. Like so:

The SHAPER variable refers to the working color space the LUT was created in (this is referred to as a “shaper” LUT). This will be either ACEScct or (less commonly) ACEScc, based on the Project Settings in DaVinci Resolve. VFX needs to know this in order to properly process the LUT in comp. It is good practice to have the client append the shaper space to the file name for clarity. See the VFX Pulls guide for details on requirements for VFX pulls.

Below is the first part of a two part video series covering how to use the VFX config both for when the client is working in ACES and also when then are still using the display-referred workflow, and how to integrate that into a color managed ACES pipeline for VFX.

This page was generated by GitHub Pages.